Nexus 4 owners, and I am one of them, were disappointed to find out that it only support 1 button headset control, so no buttons for Vol+ and Vol-. When I bought the Nexus 6P I was hoping it will have support for 3 buttons control. After I got the phone I tested it with my Samsung headset, the play/pause button and the Volume Up button work, however, Volume Down didn’t!!! I was hoping it is a faulty headset since that I can replace easily, but if it was a design mistake in the Nexus then it might be a problem forever. Luckily and after a quick Google search I found a post on reddit from someone asking if the Nexus 6P has support for 3 buttons headset. The answer was yes, so that is a good news, but one of the replies was from a reddit user “buddhra” who was having a similar problem as mine and did a further test to find out that the Nexus 6P acceptable resistance range for the Vol- doesn’t stretch to the maximum range which the Android specs allows. Here is a snapshot for part of the post:

So I tested mine and found the resistance of the third button (Vol-) to be 630 ohms, which is within the Android specs but seems out of what the Nexus 6P can recognize. Not sure if it is a software or a hardware problem in the Nexus 6P which I won’t be able to fix easily, but I know that I can instead fix the headset itself to give the readings that the Nexus 6P expects. So I opened up the headset control, it is very small and was glued together, but using a thin blade i managed to open it up: 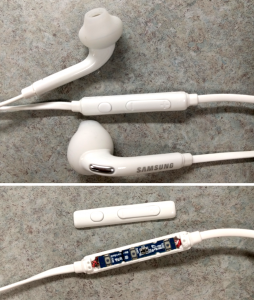 Zooming into the circuit board and tracing the PCB wires I figured how the resistors were connected and managed to replace one of the resistors (R3 = 356 ohms) with one of a smaller value (200 ohms) and it now works. (The resistors used in the board are size 402, however, I had one with size 603 which is a little bigger but there was enough space to fit it without any problems): 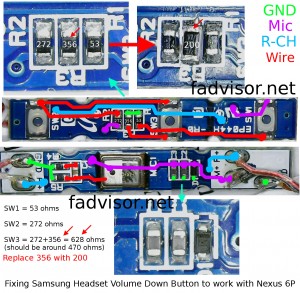 All Android headset controls follow a similar way to provide the needed resistance, so your control board might differ but it should be similar.