NOTE: The script no longer works, and the development was stopped

After being bored with Airline Manager in Facebook in which you have to keep watching your airplanes when they arrive to send them in another flight, I decided to write my own script to use with greasemonkey in FireFox to do that thing for me. Basically, you will need a computer that is connected to the internet and running for most of the time. Install Firefox and add the Greasemonkey add-on to it, then install my script in greasmonkey and enable it if it is not enabled by default. Now when you visit the flight section of the game under facebook you will see the Auto Pilot control box (shown below) in the left column. Simply set the time that you want the script to repeat the task then click on the button. That’s it, now just watch the script fly the first 10 ready airplanes and the count down will start to trigger the next run.

Here is an image showing the position on the control box in the page: 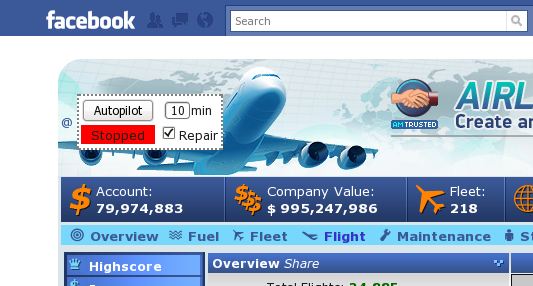 This version went through a restructuring of the code. In the previous versions I was injecting the whole code inside the AM page (AM iframe inside Facebook page to be precise) and because of that I was also storing the script settings as AM cookies. This approach is simple and makes interacting with the page easy, however, it makes it easy for AM admins to detect the script by either adding a function that searches for my functions or the entries in the cookies. In order to solve this problem I changed the way the script works. Now when you open the AM game under Facebook my script will be loaded twice, the first instance will load under Facebook frame and it will inject the AP Control box in that frame, which AM has no access to so they cannot detect it. The second instance will load under AM frame, however, it will not inject anything but rather will remain in Greasemonkey sandbox and that is also hidden from AM cannot be detected. The last thing is the settings which are now being stored in Firefox itself under GM settings using GM functions (GM_getValue & GM_setValue). The two script instances are working separately and cannot communicate with each other since they run under different domains (facebook.com & airlinemanager.activewebs.dk) as this is a security feature enforced by Firefox to prevent malicious websites from accessing other websites functions and variables. To overcome this obstacle I used the GM stored settings which are shared by both instances to communicate. In addition to all of that I added some randomization to the timer so executing the tasks will not happen at the exact intervals.

Disclaimer: The author of this script cannot be held responsible for any thing that might result from using this code, so use it at your own risk.